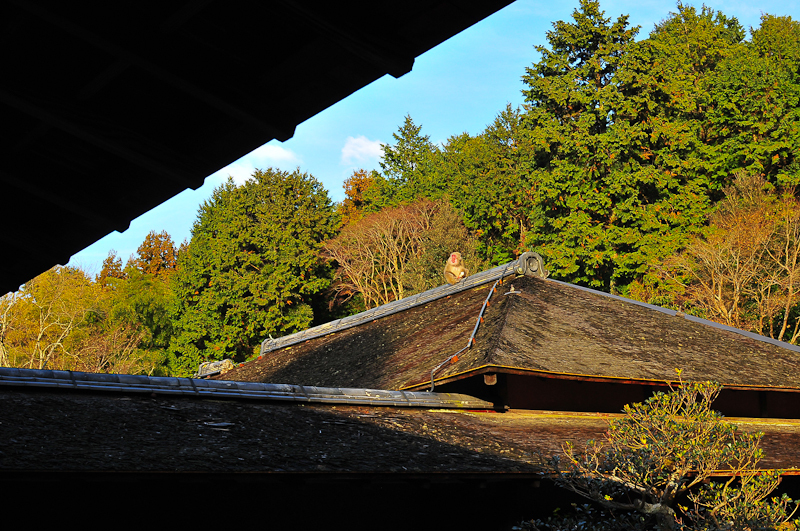 I was visiting this temple not long ago. While taking pictures of the garden I heard a great crash and then a woman shrieking "There's a monkey! There's a monkey!" Sure enough a monkey came running out of the temple with three rice balls: one in each hand and one in its mouth. These were offerings to the Buddhist statues inside, but apparently the monkey thought the statues had had enough and it was time to share. The monkey then quickly climbed to the top of the temple roof and had a very leisurely snack. Meanwhile I was startled to see one of the monks rushing down the hallway with a gun. It turned out to be a toy guy with pellets he used to drive off the monkeys -- obviously this wasn't the first time the monkeys had visited; another monk there looked up and said, "Oh, he's the small one." But still, the sight of a Buddhist monk wielding an assault rifle has stuck in my mind.

@Hiro: Thank you. This was at 曼殊院, so next time you go take your camera!

Well the shrine employees didn't get those three rice balls, did they! ;D
This is a funny story to me, but maybe not to the monks. Monkeys have to eat too. <grin>

@Judy aka L@dybug: No, the employees didn't get it this time. This seemed to have happened often, I suppose because the temple is close to some mountains where monkeys live.

LOL....too bad you didn't get a shot of the monk with the rifle! That would really have been a sight to see GJC! ;-)

@Eric Cousineau: Actually I almost did take that photo, but then I thought better of taking a picture of an angry monk with a rifle...even if it only had plastic pellets in it. :)

Very funny story, I like thinking of the monk wanting to get rid of the monkeys! No wonder they come eating there!

A fine composition with the roofline following the tree line. A wonderful story.

The multiple happenings is no doubt the reason for the gun & pellets. Glad you thought twice about taking a shot of them ... it would break the mold. ;D

Now this is SOME STORY!!! And the monkeys are sure to come back again and again...