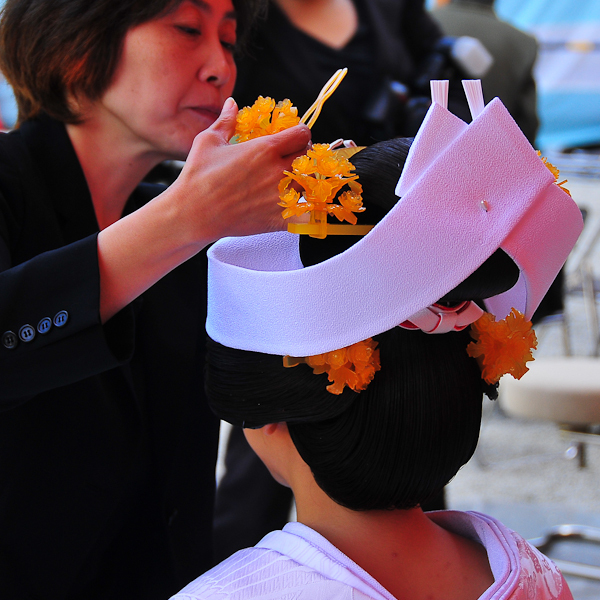 This woman is arranging the bride's traditional hair ornaments, usually made of tortoise shell.

The bride's hairstyle is an old one, called bunkin takashimada and is worn only on a wedding day. Legends of its origins suggest either a noble birth from fashionable samurai families or something less exalted, namely from the prostitutes of old Edo (Tokyo). Either is likely since both young samurai and the ladies they patronized were well known for being at the cutting edge of fashion trends.

By the time of the Meiji period (1868-1912), however the bunkin takashimada had become the standard bridal hairstyle. After the ceremony the bride would then change her hair to a less flamboyant style, called the marumage, which indicated the status of a married woman. You can see an example of that style in this link.

Now few woman grow their hair long enough to even make this style possible, and so they make do with a heavy wig. This has the advantage of cutting down on the amount of time the bride must sit and get her hair done: in olden times it used to take more than an hour to dress the hair. Given that sufficient time must also be budgeted for putting the kimono on properly, the use of wigs is an advantage.

Though I enjoy old traditions, I confess that I asked my wife not to wear her hair this way at our wedding. The elaborate wig in such an old style makes people look quite different than they do in everyday life and I wanted to at least recognize my wife when we married.

It's all beautiful...but I'm enjoying the restrained joy in the experienced face of the stylist.

Your image is amazing, and description wonderfully informative. Thank you for educating us.
Did your wife mind not going in the traditional direction?

@Judy aka L@dybug: Thank you so much. I am glad you liked the photo and the information, which I enjoyed writing. No, my wife didn't mind skipping this tradition, fortunately. We had a lovely and memorable wedding.

This is a striking image GJC! An excellent explanation of the tradition! ;-)

Outstanding beauty ! I love the way you caught this superb scene!

A fascinating photo and information.

Perfect! Having the stylist placing the flower in the bride's hair tells the story. Thank you for your description. Fascinating. I assume your wife wore one of her gorgeous kimonos for your wedding. And you, were your dressed in western or Japanese clothes? Sorry if my questions are too intrusive.