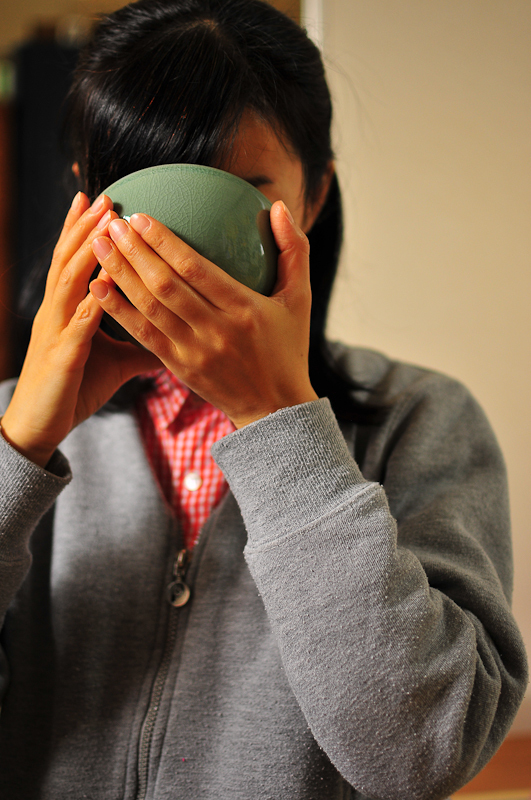 A Celebration of Tea: Sincerity of Heart

This is the final image from the short series, A Celebration of Tea, which began here.

A story is told about the great tea master, Sen no Rikyū: One of his most faithful students was a very poor man. After much study and practice and with great trepidation he decided to invite the master to his own teahouse. It was an exceedingly modest affair. The poor man had only one bowl. He was so nervous that he spilled some water. His hanging scroll had been gnawed by moths. The plate for the sweets was chipped and the bamboo whisk frayed.

Several students who had accompanied Rikyū left the tea ceremony and began snickering at what they had seen. Rikyū, however, cut them off: "That was the finest tea ceremony I have ever attended."
"What?!" cried the students. "But didn't you see him spill the water, and see his tattered kimono, and that old and musty scroll? Why, sensei, such a tea ceremony is an insult to a great Master like yourself."
"No," Rikyū replied, "he put his whole heart into the tea. Tea is not an exhibition of what the tea man owns. Instead it expresses the sincerity of his heart."

In that spirit I end the series with this photo of my wife enjoying tea at home. She won't be happy to see herself broadcast around the world in a sweatshirt, but, like Rikyū's student, in these modest clothes she makes the finest tea I have ever had. 本当に感謝してます。いつもありがとうございます。

I hope you have enjoyed this series as much as have I enjoyed putting images and text together. And I hope that it will encourage you to attend a tea ceremony if you come to Japan. Guests who are not students of tea are not expected to know or to follow all the rules of those immersed in the art. The important part is just sharing tea with a sincere heart.

Very much enjoyed the series. I'm not one for ritual and tradition...but certainly have an appreciation for a sincere heart...particularly wrapped in a sweatshirt ; ]

@ordinaryimages: Thanks for the kind words. I am rather fond of ritual and tradition, one of the reasons Kyoto suits me. So I am glad that some of that appreciation could come through in this series.

how simple these actions! nicely highlighted ...;-)

I believe YOU...but...isn't it rather difficult to find a "sincere heart" nowadays?!
The entire series was a rare pleasure! Both text and photos! Thank you so much for letting us enjoy with you and your wife this old tradition. I'm sure tea ceremony is here to stay for a long, long time....

@Nigel: Thank you very much. I am glad you enjoyed it.

Great portrait! Thanks for sharing with us!!!

Congratulations on a wonderfully informative and beautiful series GJC! Tell your wife to rest easy as it is not the decorations that we adorn ourselves with that give us beauty, it is rather a calm inner presence that radiates outward that is the real beauty.....and she is radiant! ;-)

The whole series has been the pleasure I had anticipated . . tradition is so important.

Assure your wife that we couldn't recognize her on the street, except by her beautiful hands. I adore the bowl held so lovingly in them. This image is a wonderful close for this meaningful and informative series. I have a newly gained respect for the "Celebration of Tea."
PS: Nothing warms my heart more than a gingham blouse and a cozy, well-loved sweatshirt!

A portrait of a sincere heart. A beautiful way to end this wonderful series.

Great series ! I can see Rikyu's words in this shot. Thank you.

Hi GJC, I've been lucky enough to get online recently, and have thoroughly enjoyed this fascinating story and your photos. Wishing you all the best in the festive period.