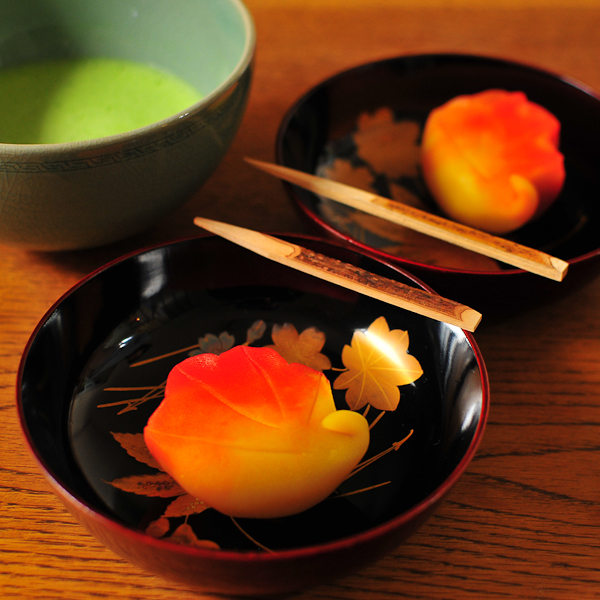 A Celebration of Tea: Autumn Leaves

Matcha green tea is usually served with sweets, of which there are innumerable kinds, but which can generally be called wagashi (和菓子). What unites the different varieties is the emphasis on seasonal themes. Here we see the leaves of autumn descend onto our plate. Later will come winter shapes, like the tsubaki or camellia flower.

These sweets are a reminder that the way of tea is not just kimono and finery and rules. It is the awareness of life as it is being lived. "One time, one meeting," (ichigo ichie; 一期一会) is a phrase often used to describe the central meaning of the way of tea: live each encounter as a unique and precious experience. As Yamanoue Sōji, one of Rikyū's great disciples, wrote in 1590: "Although it may be an ordinary tea gathering from the time you enter the roji [the path to the teahouse] until you leave you should give respect to your host as though it were a meeting that could occur only once."

An extraordinarily precise and dramatic still life. Exquisite color !!
You are causing me to notice and reflect on the 'rituals' that there are in the preparation of many kinds of food (and in other activities, too). It is very agreeable to do so. Thank you !!

Rituals are part of every culture and you are showing us some of yours beautifully GJC! The autumn colours are a wonderful contrast for the macha. Your explanation brings it all together! Thank you for sharing! ;-)

Beautifully framed ! I love tea, and I love sweets !

A wonderful composition with magnificent color. I was introduced to tea as a child, but only when I was sic. As a result, I have never fully adopted a love for it. Your series is truly an education for me.

A gorgeous and exotic setting for this celebration of tea. An excellent composition.

I like this respect for food close to sacredness

The Japanese have a unique way of taking one thing and turning it into a work of art! They did the same with the tea ceremony!