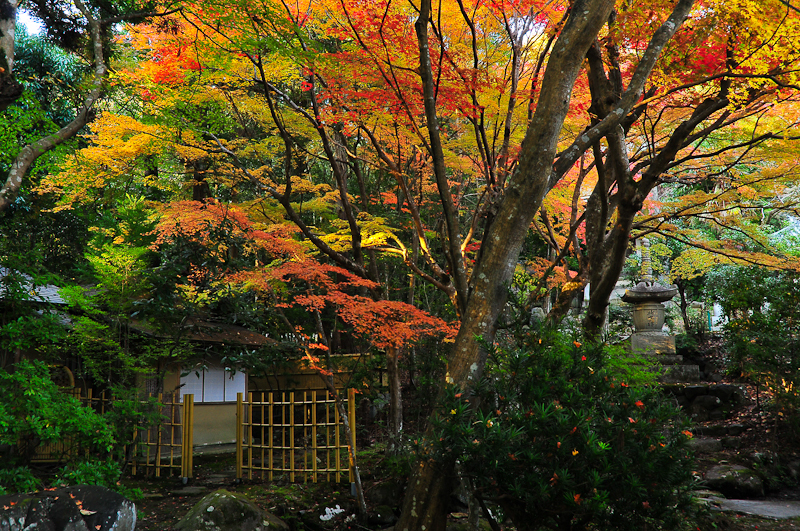 A Celebration of Tea: Autumn Teahouse

Posted by GJC (Kyoto, Japan) on 12 December 2011 in Lifestyle & Culture and Portfolio.

The Japanese teahouse is a deliberately modest structure. It was not always so. In the years before the tea master Sen no Rikyū created a new aesthetic for the tea ceremony, the practice was frequently an elaborate display of the host's costly utensils and rare decorations. Indeed, the great warlord Toyotomi Hideyoshi had a famous teahouse that was entirely gilded in gold, even down to the implements for making and drinking tea.

Rikyū, however, married Buddhism to the practice of tea, creating a new style of tea called wabi-cha (侘び茶; wabi-style tea) that emphasized impermanence, imperfection, and the beauty found in austerity. Among a number of innovations, he redesigned the teahouse so it was much smaller and made throughout with common items that gave the overall feeling of an abandoned hut in a remote mountain setting. Wooden posts with the bark still attached, smoked reeds for the roof, straw visibly poking through the mud plaster walls, windows with a simple lattice of bamboo or vine all gave the feeling of simplicity and restraint. One of Rikyū's most famous teahouses, called Tai-an (待庵), was built to host the very warlord who owned the golden teahouse. Rikyū's design, however, was only two tatami mats wide: about 1.8 meters x 1.8 meters. The most powerful warlord in all Japan was given a space of only one tatami mat, and watched as Rikyū prepared tea with utensils made from bamboo. A Portuguese Jesuit missionary living in Japan during Rikyū's life marveled at "the rustic poverty and solitude, the withdrawal from superfluous things of all kind" that was the hallmark of Rikyū's wabi-cha.

This teahouse beautifully illustrates the idea, quietly tucking itself into the landscape and providing both host and guest a breathtaking communion with the autumn leaves.

A feast for the eye...yet I wander up the path to the monument you discreetly tucked in. best…jf

Great colors!! I like the mood in this shot!

. . "the withdrawal from superfluous things of all kind" . . wonderful thoughts.

Gorgeous ! I've never been there...

A fantastic image with wonderful description, and beautiful ending ... "breathtaking communion with the autumn leaves."

So beautiful in it's autumn setting and in your wonderful description here - I have learned much on this page..I am amazed at every turn...Beautiful in every way GJC - Thank you so much!

And a breathtaking photo! Thank you for the description.

It is my pleasure to review these natural scenes and colors so beautiful. Simplicity is mixed with the exuberance so happily, thanks ;-)

The trees provide a splendidly colorful canopy over the modest teahouse. A gorgeous scene.

This is certainly a BREATHTAKING COMMUMION with nature! SPLENDID!

good photo for this time of the year