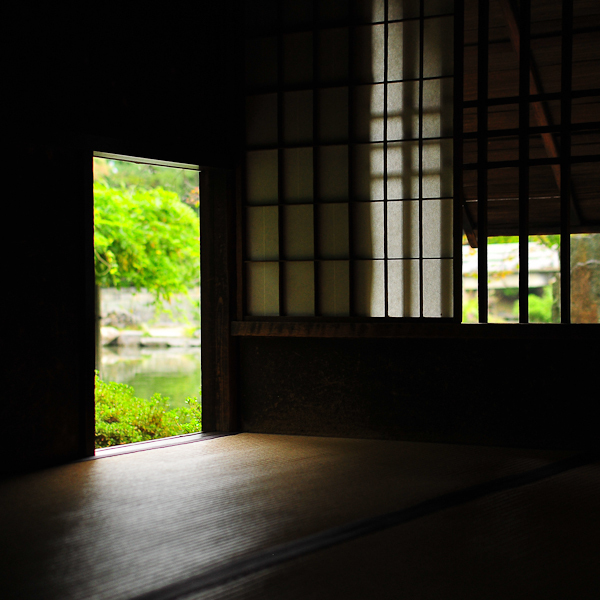 A Celebration of Tea: Humility

This is the entrance inside the teahouse in yesterday's photo. This style of doorway is called a nijiriguchi (躙口) and legend says that it was first designed by the great tea master Sen no Rikyū (千利休) who lived between 1522 and 1591. An early source written in about 1650 tells us that Rikyū took the idea from the small portals on the boats that passed through his native town of Sakai, because he admired how they offered an entrance into a different world, one where all who entered were joined by a common journey. The Buddhist symbolism did not escape him.

The standard width of the nijiriguchi is usually 65cm x 60cm (25in x 23in) making it impossible to enter the teahouse standing up, or wearing the two swords of the samurai. Instead, Rikyū wanted guests to enter the teahouse by bowing their head and sliding in on their knees. A rack outside gently reminded samurai to remove their weapons. These rituals of humility were essential, Rikyū thought, to entering the space for tea in the proper frame of mind.

You captured the quiet. best…jf

This serie is stunning! Great one!!

This series is everything I had hoped . . an education.

@Ronnie 2¢: What a very kind thing to say. Thank you very much.

I like your subtle shot! IT IS an invitation to humility, BUT.....Hideyoshi knew no such thing as humility even in the presence of Sen-no-Rikyu, even though he supported cha-no-you...he was a many of many complexes, he felt his inferiority when faced with Rikyu's humble attitude.And to show WHO he really was...he built himself a teahouse made of gold....Now THAT is a lesson on humility..lost!