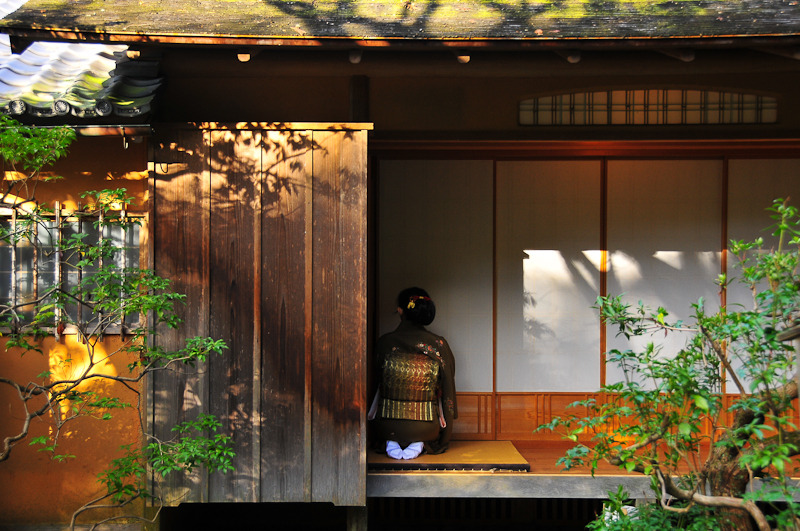 A Celebration of Tea

Posted by GJC (Kyoto, Japan) on 5 December 2011 in Lifestyle & Culture and Portfolio.

Tea culture is one of the outstanding achievements of Japan. The large number of women who study tea ceremony is one of the reasons for the continued vitality of Kyoto's kimono culture, something I mentioned in an earlier post. But it also supports innumerable other arts, including calligraphy, architecture, garden design, flower arranging and ceramics, to name just a few. Indeed, because so many arts intersect with the world of tea, it can rightly be considered the heart of Japanese traditional culture.

Starting today I will post a series celebrating this world of tea in Japan. I hope the explanations will enrich the photos, but that the photos may stand on their own, too. Just a note to keep in mind: photography is not allowed during a formal tea ceremony; it is too distracting. But the careful observer will find many expressions of tea culture outside the teahouse as well, and we will focus our attention there.

The tradition of taking tea in a ritual setting has a long history in Japan. Tea was first brought from China in the 9th century and initially was used by Buddhist monks to help them stay awake through long periods of meditation. It is generally conceded that the modern version of the tea ceremony now so famous throughout the world emerged in the 16th century under the guiding hand of the great tea master Sen no Rikyū. From him descend the three great schools of tea (called the sansenke; 三千家) that are now practiced: Urasenke, Omotosenke and Mushakōjisenke. We will encounter Rikyū again later in the week.

We start at the teahouse of a Kyoto temple named Shōren-in (青蓮院), with a woman in traditional fall kimono as she kneels to open the shōji paper-and-wood screen, enter the teahouse and join the guests. Let's follow her into the world of Japanese tea...

My eye keeps going to the architecture ; ] best…jf

This promises to be something exquisite, this series! I am very excited!
While I felt attracted by sumi-e painting and ikebana, and I took some lessons...I never felt good enough for cha-no-yu, though I participated in some sessions, some professional, some not. What I can say is that in photos the ceremony looks attractive, it draws your eyes, it charms your soul, it makes you think....
In reality, well...it's a matter of taste and education.
The image you show us here is just preparing the viewers for the celebration inside, for a spiritual experience....

@Japanalia: Thank you (as always) for your kind and thoughtful comment. You are right that, like most things even up to religion itself, the practice and the ideals can diverge in ways that turn some people off. Still, I hope that some of the exquisite beauty and care behind the world of tea, despite the sometimes petty nature of its everyday practice, will come through in this series. Hope you enjoy!

As I might have mentioned here before, I have tried only three cups of tea in my life but the impact of it being central to a culture is not lost on me. Interesting commentary from Gabriela here, too. A series to look forward to for sure.

@Ronnie 2¢: Then break out the tea bags and let's have at it. Thanks as always for your interest and support. I hope the series will be interesting for you.

I look forward to more of this series of yours, along with your commentary and Gabriela's comments.
Tell us, why does she "kneel to open" the shoji screen?

@Judy aka L@dybug: Thanks for your visit and your comment. The simple answer is because "that's how it is done properly." I will talk a little more about this later in the series... Hope you can visit again.

This is a gorgeous image! Excellent composition, framing, light. colors, balance. Wow!
Thank you for the explanation of the tea ceremony. I'm tickled that it was first used in Japan by monks trying to stay awake during meditation. I'm a Quaker, and see people fall asleep during our hour-long unprogrammed meetings. Maybe we could serve tea at the start!

@Anita: Thank you for such a generous comment. Yes, try a little tea at the first and see what happens. You may be surprised!

Fascinating! I hope to catch it all - but I'll have to track-back next month, as I'm going incommunicado later this week for a long while... Peace!

@Ian Smith: Thank you for your kind comment. I look forward to your return. I hope you will continue to post your magical photos during your incommunicado period.

Sir, your text, here, simply excels! I really loved reading it and it does such a magnificent job of preparing us for the journey you will be taking us on. The image is absolutely perfect in every way and really represents what you have said in print...everything goes hand-in-hand, as does the culture of te that you so eloquently described. Please allow me to apologize for not responding much lately to your wonderful and appreciated comments! I have, as I mentioned, truly appreciated them though! Tghanks for your kindness and positivity! I am usually in and out quite a bit during this time of year, with family items to be taken care of - but please rest assurred that i always appreciate your words and will try my very best to keep up with you as well :-)..May I have some Jasmine or Lichi (sic), please??

@Denny Jump Photo: You are very kind. I understand something about the various commitments you are working with, so please don't be concerned. I am glad to share my images with you even if you don't have time to comment. I greatly appreciate your support and your interest.

thanks so much for this pedagogical information and this picture is so delicate !