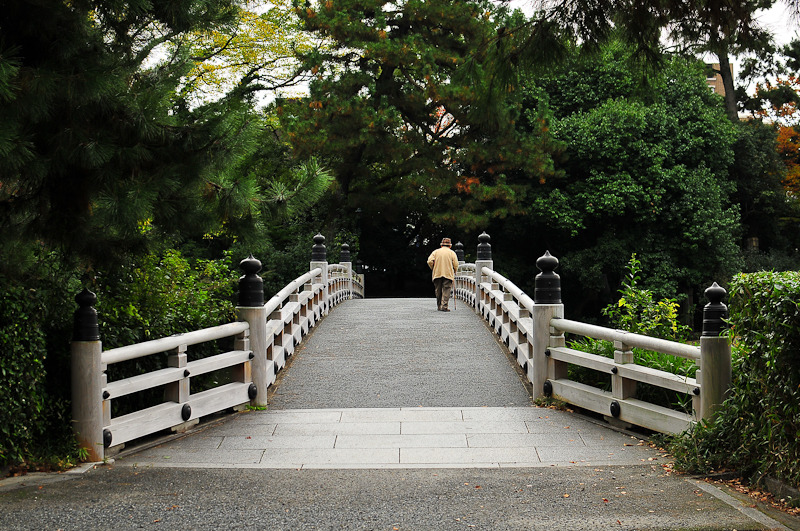 This beautiful bridge in the Imperial Palace grounds was built in 1878 and it crosses a pond that was once part of the garden of a powerful noble family named Kujō (九条家). When the Emperor Meiji moved the capital to Edo and renamed the city Tokyo [東京都; literally the "Eastern capital" to distinguish it from Kyoto to the west] the old Imperial Palace was abandoned and began to fall apart. This bridge was part of the Emperor Meiji's effort to restore grandeur to the grounds, but the exquisite Kujō family estate gradually decayed and disappeared. Now all that remains is a tea house and the old garden pond, surveyed by the Emperor's new bridge.

Love this! The person on the bridge adds that extra something. You have many beautiful photographs in your portfolio.

thanks for the history and the old man seems slowly walking towards the end...

Stunning and oh so lovely you know your world :)

Beautiful low angle pov in this well framed shot GJC! Great information to go along with the shot and put it into context! ;-)

Looks in very good condition for its age.

A moving image with the elderly person having a peaceful walk over the bridge!

A wonderful bridge and beautiful scene. The man crossing a bridge completes the picture perfectly.

Good timing in taking this photo. The man walking with a cane adds the bonus to this image. Lovely composition and light.

a perfect picture of harmony and graciousness ...