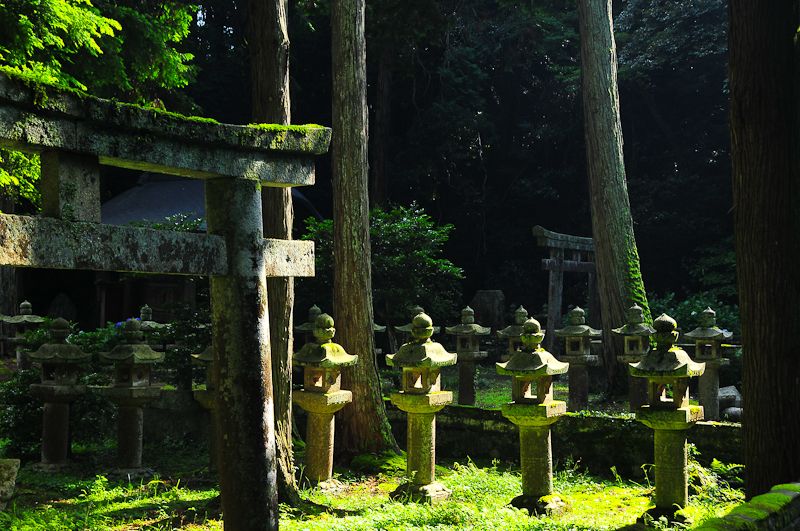 In the Land of the Gods

Taken at Gesshoji Temple (月照寺), in Matsue. This part of the temple has the graves of many of the Matsudaira lords who ruled Izumo province. Lafcadio Hearn, whom this week we have been following around through Matsue, was particularly impressed by Japanese Shinto in which "the dead are made divine."

The foreknowledge of this tender apotheosis, he continued, must temper with consolation the natural melancholy of age. Never in Japan are the dead so quickly fogotten as with us: by simple faith they are deemed still to dwell among their beloved; and their place within the home remains ever holy. And the aged patriarch about to pass away knows that loving lips will nightly murmur to the memory of him before the household shrine; that faithful hearts will beseech him in their pain and bless him in their joy; that gentle hands will place before his ihai [funerary tablet] pure offerings of fruits and flowers, and dainty repasts of the things which he was wont to like; and will pour out for him, into the little cup of ghosts and gods, the fragrant tea of guests or the amber rice-wine. Strange changes are coming upon the land; old customs are vanishing; old beliefs are weakening; the thoughts of today will not be the thoughts of another age, -- but all of this he knows happily nothing in his own quaint, simple, beautiful Izumo. He dreams that for him, as for his fathers, the little lamp will burn on through the generations; he sees, in softest fancy, the yet unborn -- the children of his children's children -- clapping their tiny hands in Shinto prayer, and making filial obeisance before the little dusty tablet that bears his unforgotten name.

Beautify, soft light in this shot. Japanese graveyards are so photogenic but they usually are dark. I've visited Matsue too, isn't it a great little town?

What amazingly powerful Beliefs you have set out here . . " . . the little dusty table that bears his unforgotten name." . . .

Hi GJC! FIrst, please allow me to thank you for your wonderful elaboration back to me on yesterday - I really appreciate that. It put everything together for me quite well...and now I see, with your post and text today, how it is all coming together in terms of Hearn and his relationship with Japan. This is all so very new and refreshing information for me. I love learning about the interrlationships of cultures and the influences one has on another. I quite agree with him about the quick disassociation that western culture seems to have with (and about) the dead. This is beautiful ! Thanks again, so very much, GJC ;-)

I love both the beautiful image and the text....My favorite line is: "by simple faith they are deemed still to dwell among their beloved; and their place within the home remains ever holy." It reminds me that here in the US (at least these days) we have so little respect or even memory for our elders. I think it's terribly sad the way so many of our elderly are shipped off to nursing homes, seemingly to be forgotten....

The image is beautiful, but it is given a special touch by the excerpt you've chosen. Is it still true? Then I do not wonder that the Tohoku residents were looking for the remains of their home shrines among the rabble and were worried about the graveyards partly destroyed by the big quake.