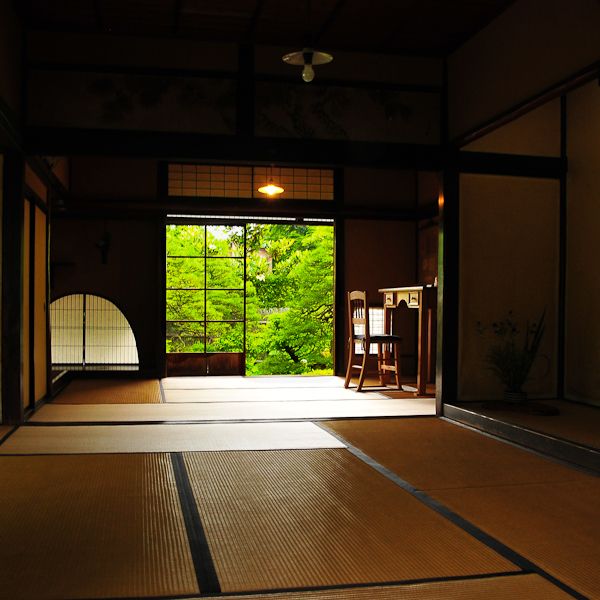 A Place to Write

This is another view of the home where Lafcadio Hearn lived with his new wife, a woman named Setsu whom he met not long after arriving in Matsue. Hearn wrote in this back room, and we see here copies of the desk and chair he used. Because he struggled with poor eyesight the desk was built high enough that his papers and books would be close to eye level when he sat down.

His greatest pleasure was to live in the world of his imagination and to write, his wife Setsu wrote in later years. When he was lost in his writing, he often saw visions and heard imaginary sounds, which made me very uneasy, and I just wished that he would not become so absorbed. There were times in Matsue, when I was still young, I thought that Hearn might lose his mind. I was so worried that one day I asked Nishida [a friend] for his opinion. In the course of time, however, I came to realize that he was just totally caught up in his own thoughts.

It shoud be ideal for writing and also good for me as a hermit.

And what a special place this looks to be. Love the sense of form and proportion here and, as so frequent in your postings, the gentle balance with Nature.

While living in Izumo, I must have visited the Memorial Museum. But I cannot recall the details. Your photos are fresh for me.

The mind is a dangerous place...never venture in there alone. best...jf

Beautifully composed shot GJC! Love the rich colour of the wood offset by the cooling green of the garden! Nicely captured! ;-)

A beautiful image and text to match even more..just wonderful text, GJC...thank you. I think if it were I, I would not be able to write because of the beauty around and I would be distracted by it...but to each his own,. Obviously, he drew energy form the proximity there by the door and it fired him up...Beautiful piece, here sir!

Wonderful balance between the light and the darkness!

you managed so well this picture !! I would love to live in such a place :-) His desk makes me think of Glenn Gould's piano chair

Serene and beautiful place to write. Great handling of darks and lights, as always!

This is so beautifully shot...it simply makes me sigh!