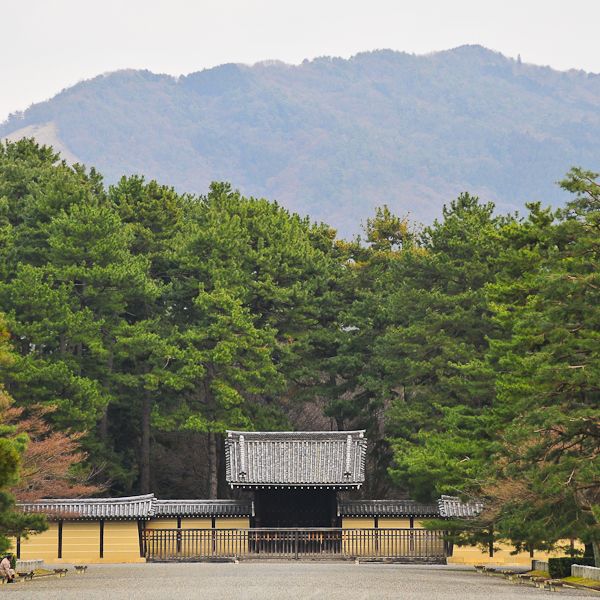 A Place to Retire

This is the entrance to the Sentō Gosho (仙洞御所), a palace built in 1630 for the Emperor Go Mizuno-o (後水尾天皇) who was forced into retirement by the Shogun, Tokugawa Hidetada (徳川 秀忠).

It all began when the Emperor married the Shogun's daughter. The imperial couple had a son, now the Shogun's grandson, and the Shogun wished to place him on the Chrysanthemum Throne. He therefore "encouraged" Emperor Go Mizuno-o to retire. To sweeten the deal, the Shogun offered a handsome amount of money and built this palace. Unfortunately for everyone concerned, the new emperor soon died, as did Go Mizuno-o's second son. The result was a rarity in Japanese imperial history: the reign of a woman, the Empress Meishō (明正天皇).

After abdicating, the retired emperor lived in this palace for another fifty years, and he became a connoisseur of many things including women (he eventually fathered over thirty children), flower arranging and especially gardens. The palace buildings did not do as well: they burned down on six different occasions and in 1854 after the last major fire the buildings were not put up again. The palace is now open by appointment to the public (you can find out how to apply here) and is still famous for the spectacular gardens, laid out in the 1630s under the retired emperor's supervision, as well as an exquisite tea house.

... A story that passes the time and the centuries ....
.... a photograph taken despite the fine imposing building: it's what I love the way you see this beautiful country ..

thanks for this very interesting explanation. The gardens are beautiful

What a fascinating story . . the very thought of an Emperor going into retirement (although he clearly made the most of the time it gave him !).

A wonderful history to go with this shot GJC! Thank you for sharing! ;-)

That is an impressive and amazing story GJC! There is so much legend and history still unlearned by the masses of us out here...that's one of the most wonderful things about this blig I think - we can all learn from each other in so many ways beyond photography! Thank you very much for this fascinating story!

A beautiful shot. I visited the imperial villas. While waiting at the entrance, a couple from Germany, perhaps, showed up without the entry credentials. I suggested they go apply because they wouldn't get in without them. When it opened, the person checking the entry documents gave mine a long hard look before being satisfied. That Japanese attention to detail!

I visited both detached villas - Katsura Rikyu and Shugaku-in Rikyu - in 1984. I was too fresh to Japan to understand that much, but I remember that the gardens made a great impression on me. Very difficult to take pictures as the group was led around under supervision and you were not allowed to trail behind. Moreover I went inside with a group of Japanese visitors and my Japanese at that time was non-existent.One needs time when going around the gardens!

@Japanalia: I agree that the visits to these wonderful places are not conducive to truly appreciating them, let along getting anything worthy in your camera. I know they need to get lots of people through, but on the other hand it seems that they ought to make some concession to how the places were designed to be enjoyed.

Very interesting. Thank you very much for sharing your history.

It does appear to possess the feng-shui of royalty but with less flashy color. Thanks for the description.