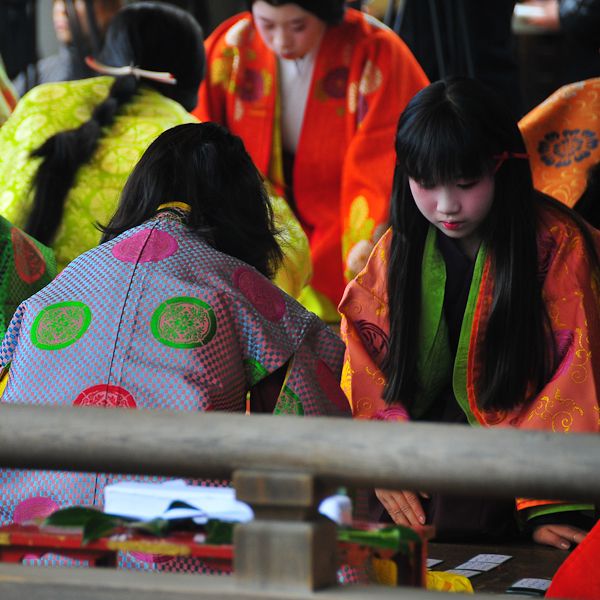 Dreams of Miyako (都の夢想) is part of an on-going series that celebrates contemporary echoes of the 1,000 years during which Kyoto was Japan's Imperial capital (miyako) from 794 to 1869. To see others in the series, click on the tag "miyako" or "都".

I took this around New Year's at Yasaka Shrine (八坂神社) where every year they gather folks together dressed in the court costume of the Heian period (794-1185) and play an old poetry game called karuta (かるた). There are two players who sit facing each other, and before them are a series of cards with portions of a poem on them. A third person will begin reading the first lines of the poem and the players have to be the first to recognize the poem and grab the correct card that has the second half of the poem. These players are mostly amateurs brought together just for fun and for a good show, but there are professional karuta players who are extremely fast. If you would like to see a very short video of this game at Yasaka Shrine, click on this YouTube clip.

Your photos make me love Kyoto even more than I did when I visited Japan. Great colors and composition in this one. I find so unique the way Japanese people keep their traditions alive. And it feels so good that they don't drop them so easily! Have a nice day, GJC. 良い一日を！ :)

Greats colors for this shot!

Looks like the Texas Hold'em tournament but Mikayo style :) I can't help but notice how fancy and colorful a player has on, perhaps to distract the other player?!? Nice shot.

A colourful composition GJC! A wonderful idea to keep these traditions alive! ;-)

A beautiful photo. The video really puts the colorful photo into context. Some of the ladies in the video seemed pretty fast.

It's great to see this young lady participating in this wonderful tradition. A beautiful composition.

Nice colorful shot ! I would like to see it next year.