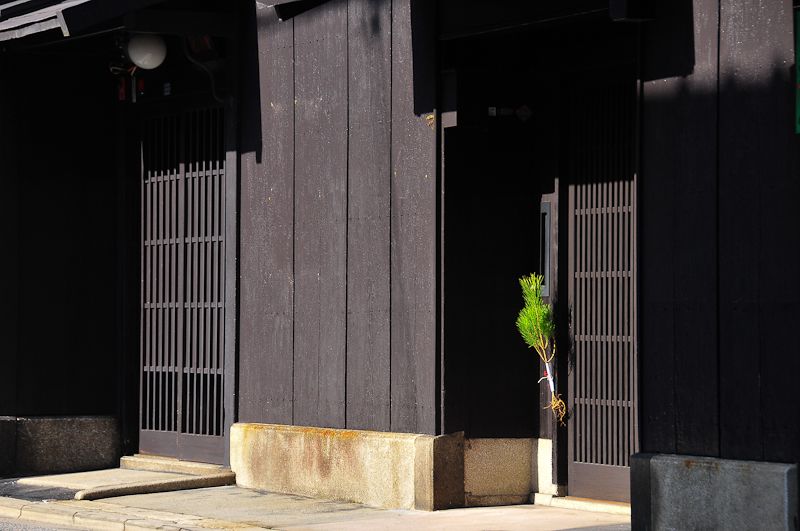 At New Years, especially in the period called matsunouchi (松の内) which extends from January 1 to January 7, it is common to find these little sprigs of pine posted on either side of the entrance to a Kyoto townhouse. (The angle of my photo here only shows the one.) This decoration is called called nebikimatsu (根引き松) which translates literally as "uprooted pine," and the name comes from the fact that it is literally an uprooted baby pine tree with the root still attached. The bottom of the pine just above the root is wrapped in a piece of white paper. The pine serves as the "seat" for the god of the new year, Toshigamisama (歳神様), to descend into the mortal world and to receive the offerings given in return for protecting the household in the coming year. In Kyoto it is also traditionally said that one should not leave the house during the first three days of the New Year, because Toshigamisama may escape out the door as you depart. This is one of the reasons why the traditional meal made in preparation for the New Year, called osechi (おせち), is designed to last for three days.

How lovely - that little splash of colour.

I like these traditions of another time(weather) which are always of news..
Your images are very uncluttered: what I like moreover thank you for these explanations of a country yes: stranger for us.;;-))

Another excellent explanation of your wonderful traditions GJC! Well done! ;-)

Thank you very much for exlicación friend! Very interesting relationship with the tree! Nice picture which confirms the text! Have a nice day! Best regards, Adela

Thank you very much for the explanation, GJC! Have you ever followed the tradition and stayed home until Jan 3?

@L'explorateur: No, I have never been able to stay inside that long over the holidays. Still, my wife thinks it's a little odd to go on vacation at this time, so we usually stay in the city.

Wonderful image, Japan as I like it. And thank you very much for your explanations. Very interesting!

Now THAT'S my kind of meal ..but what a wonderful story and narrative GJC - thank you so very much for the elaboration...some of it sounds familiar as I lived around some Japanese-Americans as akid...but that was MANY yeaes ago...This is not only a lovely image but a wonderful wonderful story...Thank you so much for sharing it with us and thank you VERY much for visiting my blog while I was out of pocket...I wish you good health and good spirits for the New Year!!

The image you're presenting is so very much in tune with the text of your story, one has the feeling that the world stood still at New Year....probably not to disturb the feasting of the visinting Gods. Most interesting and thank you for taking the time to share all these details with us!