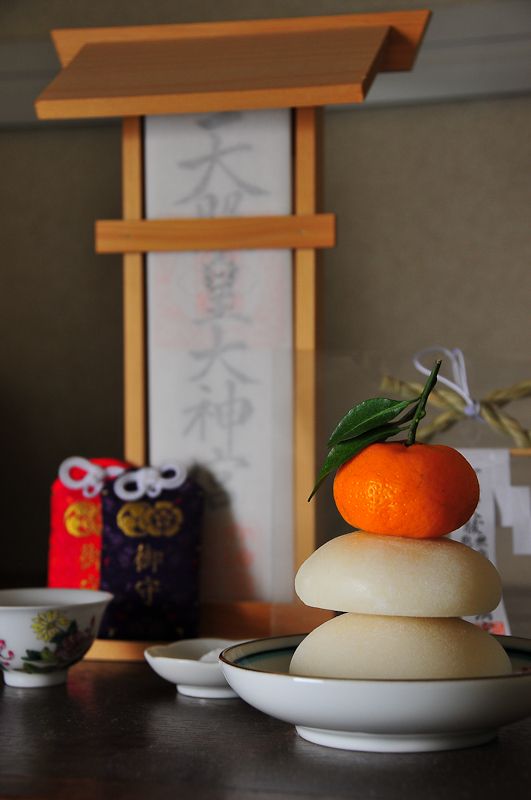 Signs of a New Year

Like many homes, ours has what is called a kamidana (神棚) or a place to worship the Shinto gods that protect our health and house. A kamidana is often a specially built feature of the house and then in that case it will include a number of pieces, but ours is simple and we have just put the things on top of the dresser.

It is best if it faces south or east (ours faces south) and includes a few minimum objects of worship. The tall wooden feature in the back holds the ofuda (御札), which has written on it the name of the shrine and the main god of that shrine (in this case the god Amaterasu 天照大神 of Yasaka Shrine of Kyoto; 八坂神社). It provides the home protection, and we replace it every year at New Years with a new one. We also have the more portable red and blue good luck charms, called omamori (お守り) resting up against it. In front is a small cup for offering the gods fresh water, and another small plate for salt. Finally, in honor of the New Year, we have placed a special kind of rice cake called a kagamimochi (鏡餅) with a small tangerine atop. There are thousands of explanations for the meaning of this ritual, which is to say that we don't really know except that it has become a tradition, and that it is fun to guess about what it originally meant long ago. Actually you are supposed to top it with a Japanese citrus called a daidai (橙), because it has a special meaning: if you do not pick the fruit it will stay on the tree for several years, turning green in summer and then orange/yellow in winter and back to green again in summer. This means that you will have many generations of descendants. Having just produced a descendant three months ago in the form of our delightful baby, I don't feel so badly that I couldn't find a daidai at the store and so replaced it with one of these tiny tangerines instead. Our one descendant is already enough!

I like knowing the customs of a country or a region in Japan everything is so made in the sharpness, that it pleases me very thank you for this explanation...
Expert on Japan as I like;-)

I very much enjoy the interesting traditions you present to us through this blog - and the excellent photo's that go with it. You really should compile a tabletop book or three in the future, as its a fascinating insight.

marci from in, Morocco

thank you for this wonderful explanation - very fascinating! what a wonderful documenter of culture you are!

Outstanding details to go with this beautiful picture GJC! It is always interesting for me to learn about the culture of other countries. Thank you for sharing! ;-)

I love the explanation- it is really interesting to know different customs and beliefs, and know that even though we are all different, we are all the same too! And it is fascinating to try to figure out what different customs meant originally. Great Dof, and lovely composition in this image.

Thank you very much for your detailed explanation and very interesting. A leading cultural information. Fantastic image that accompanies it! Best regards, Adela

Happy New Year! May all your creative aspirations be fulfilled in 2011.

I like the way you're presenting things Japanese and I've noticed a little change since your daughter has been born: you're getting softer, which is very nice!
We have a kamidana in our condominium that my husband built all by himself. And we go to the shrine in Yokohama (Isuyama Kotai Jingu) after NY's day, and buy ofuda and o-mamori. Only that we don't place o-mamori the way you did in this shot, we wear them, the closer to your body, the better.No kagamimochi here...But of course, the tiny bottles of sake and as tiny plates with salt and rice. You're right, it is a beautiful tradition.....even though (like you) I don't understand exactly everything.