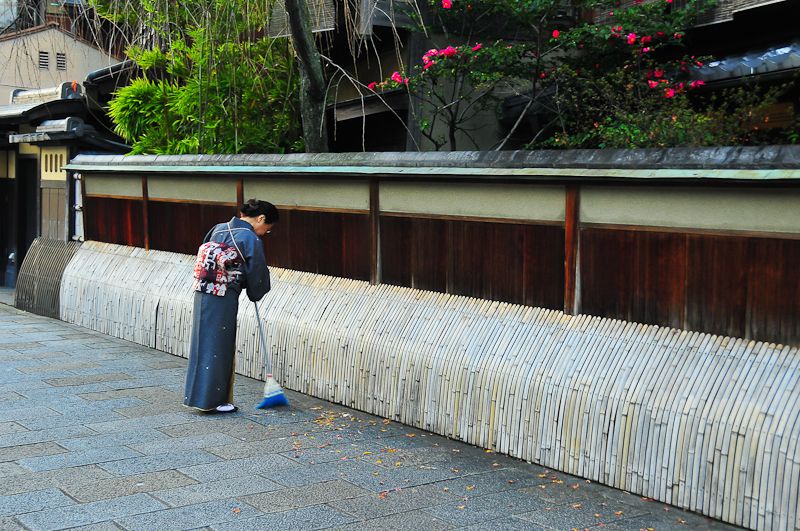 It is a tradition to do the biggest household cleaning of the year (大掃除) at New Year's. This year I did the best I could and was rather proud of myself for all the little forgotten areas and unseen places I had reached. But just as my pride had reached its zenith a meal I was cooking boiled over and I noticed that underneath where the gas range sits it was quite dirty from many other meals that fell, burned, boiled over, slipped off the pan and so on. So there is always more to do and it is hard to pretend that you have not seen the dirty places and to return to the time when you never noticed them. They jump out at you every time you pass by. Perhaps this is why there is the tradition of New Year's cleaning.

I took this photo in the Gion district of downtown Kyoto, famous as the geisha district and where there are many fine restaurants like this one. The little slats of curved bamboo coming half-way up the wall are a traditional feature of old Kyoto homes, and is called an inuyarai (犬矢来) or "dog fence." The idea is to keep dogs (as well as drunk folks coming home from a long night out) from using the wall as a bathroom. But as with so many things in traditional Japanese architecture, they have a beauty independent of their function.

Very nice. But if only the colour of broom was not blue.

Very interesting reading your friend! It reminded me that in my parents' house once a month to an intense cleanup. It was a Saturday ever. A tradition in my family maybe? was typical of our culture too? On Saturday morning cleaning the park took us to the house was empty. To be able to clean better. Hidden corners that sometimes we are the worst and those who are more work ... in the kitchen and behind the fridge! in living rooms, in the dusty shelves and the books ... Each day of each new year, to do thorough cleaning or it is better not to see and do? Interesting evocation friend, Adela

You may follow these so interesting details of life and culture all the year round :-) It gives life to your pictures

As with so many of your images (and narratives) there is a timeless beauty about this . .

I love the way the Japanese can make functional so beautiful! Just looking at the fence I see only the beauty of the curved lines and don't even think of why it might have been made that way! Good luck with your cleaning, we are in the middle of a "whole house" cleaning ourselves....amazing the things I am finding that I had forgotten about!

The practice of cleaning before welcoming the new year is common around the world in many cultures. It is always a good time to rid ourselves of things we have gathered that really should have been thrown away long ago! Nicely captured GJC! ;-)

You are so right about always seeing the mess once it has been noticed. Thanks for sharing this lovely tradition, one I'm not practicing.

Glad to see the weather is good in your part of the neighborhood :) Couldn't clean my yard if I wanted to, socked in for few days. But I did get my haircut :)

Ahhh...but this is before The Snow! I like the sassanqua blooms smiling red from above the wall. Then the dainty pattern created by the bamboo fence. Next, the leaves on the patterened slabs covering the walkway...And I even like the broom...which is blue and complimentary to the lady's kimono (is this just a coincidence?) I like the peaceful busyness exuding from your shot....

Perfect title for this image...Excellent!