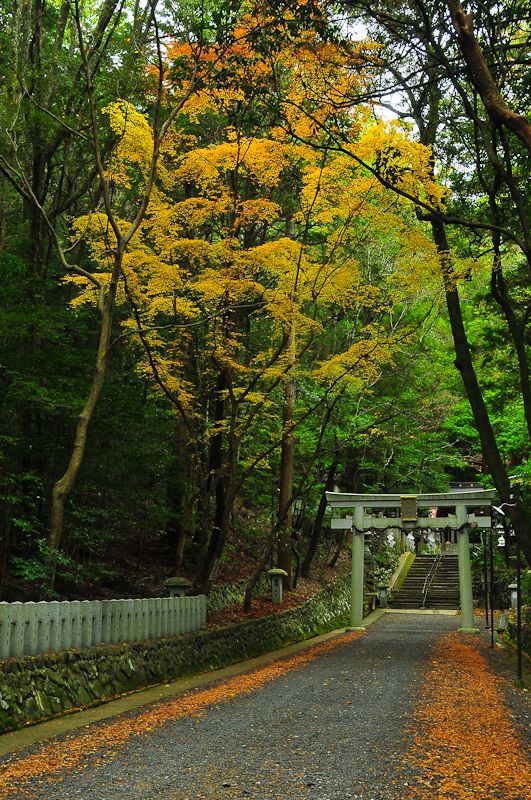 To a Sacred Place (崇道神社)

Posted by GJC (Kyoto, Japan) on 14 December 2010 in Landscape & Rural and Portfolio.

My tripod is bulky and inconvenient, but I like how it makes me slow down. And I cannot take photos at one of my favorite neighborhood Shinto shrines without it. This is one of the few shrines in Kyoto that still has a large plot of forested land around it. This makes it, to me, one of the most majestic Shinto sites I know, and well worth the trouble of getting out the tripod.

Sudō Shrine (崇道神社) honors the aggrieved spirit of Prince Sawara (早良親王) who died in 785 in exile after being falsely accused by a rival of intrigue at the Imperial Court. His death was marked by a number of natural disasters that were all seen as signs of his anger at being wrongly banished. To appease him, this shrine was built in the year 785, though it has been moved several times since then, and is now in the Kamitakano region of northern Kyoto. It is in very few guidebooks, but I think it is well worth a visit if you come to Kyoto. Bring your tripod.

Oh yes, the tripod is your friend and mine. ;-) This is an absolutely gorgeous photo. Very elegant.

tripod is an item I never use and this morning looking at your picture I feel wrong about this !

I have to say the composition is perfect.

So enchanting . . how could one not walk that pathway ?

The tree in yellow looks like a priest....maybe it used to be one at the shrine and got reincarnated in this tree. It looks so peaceful and a little otherworldly....

A beautifully framed shot GJC! Definitely worth the effort to bring your tripod! Well done! ;-)

I'm with you ... carry tripod is heavy but it is certain that the pictures are much better ... You have to take it up forever!
Does not surprise me that this place is one of your favorites ... is wonderful!
A beautiful picture! Best regards, Adela

Beautiful composition with these wonderful tones!

The pathway leading up the stairs to the shrine seem to invite and prepare....the yellow leaves on the tree providen encouragement. The entire scene, here is one of beauty and peace, which belie the story but since the Spirit of Price Sawara seems to be living on, it appears that he, too, may be at peace now for the reverance paid to him. I would truly love to see this first hand...thank you so much for taking us there GJC!! Just wonderful!

I don't know if this is random or on purpose, but the tree behind the gate is evergreen while the tree in the front is deciduous, interesting. Beautiful place.

@Howard F.: An interesting observation. I would have to say it's accidental; a Shinto grove is one of the few places in Japan where trees grow naturally and are neither necessarily planted nor pruned.