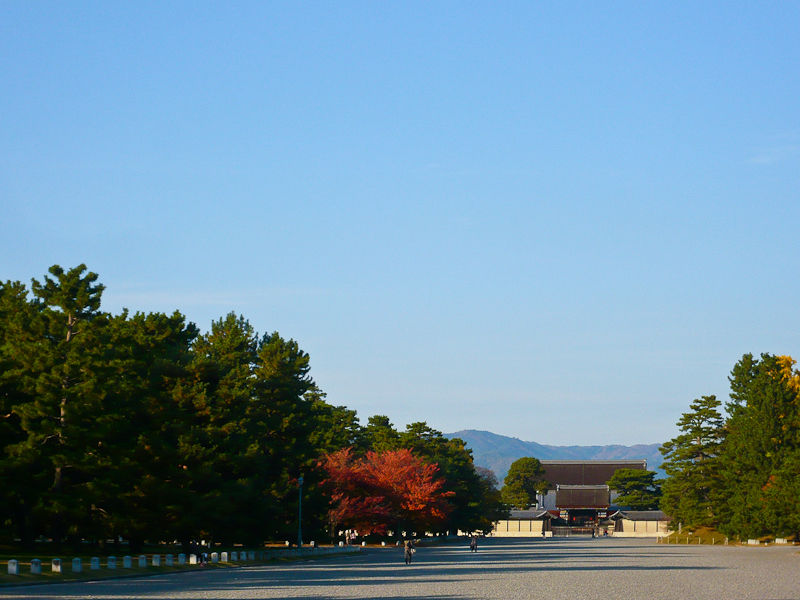 Late Afternoon at the Palace

Several kind people commented "less is more" on yesterday's image, and that inspired me to post this photo.

One of the things I admire about traditional Japanese architecture is its willingness to live with the earth rather than on it. A fine example is the old Imperial Palace. Even this, the former residence of the (formerly) divine Emperor is remarkably modest when compared with royal residences in many other parts of the world. Of course at the time the Emperor used this Palace it was luxurious well beyond the imaginings of ordinary Japanese people, but even these grand structures still manage to live with their surroundings rather than simply overwhelm them. Here, on a peaceful late afternoon, the Palace seems to join us in appreciating the beauty of the light, the trees and the encompassing mountains.

Yes, much truth in the words and picture here . . that humble harmony between Man and Nature is so often a distinctive feature of your postings and the culture that surrounds you.

A clean and elegant composition with a large open space ... huge space for walking the look! Excellent panoramic full of light and color . Best regards, Adela

the picture goes with your words

Although I am afraid that western civilization has not and will not learn from cultures like Native America, Japanese and others, we still jhold a wish and a hope that they would. We do what we can, thiose of us who cae, but the efforts seem to be counteracted, contradicted, and confused by reactionary elements in the society here- those who are unwu=illing to see what is right there in front of them...instead they plod on with mass "development" and more lanes on the freeways....I could go on but I better stop...this is a photography blog, but I hear what you say GJC!

indeed from this point of view, the framing is justified as the foreground was empty
jc

I believe there's a reason for leaving such a large empty space in front of the Imperial Palace in Kyoto, as is the case with the Imperial Palace in Tokyo....otherwise one is at a loss of big open spaces in Japan. And...while I agree that you managed to make this empty space very much PART AND PARCEL of your posting today...I must stress the fact that Japanese people managed to make many parts of this country look ugly. Not everybody KNOWS how to live WITH the surroundings, specially so the real estate developers!
You are lucky to live in Kyoto...which is a very special location in Japan!

@Japanalia: I agree, and there are PLENTY of (to me) ugly places in Kyoto and they seem to increase daily. That is one of the reasons I tend to be more attracted to older, traditional buildings which seem to have been built with a different sensibility. But you are right: I am very lucky, and very happy, to live in Kyoto.

A beautiful image of this wonderful place. Hanging in the entry hall of my house is a photo of the wonderful bridge in the gardens of the Imperial Palace taken when the trees were in fall colors. I cherish the small amount of time spent in Kyoto.