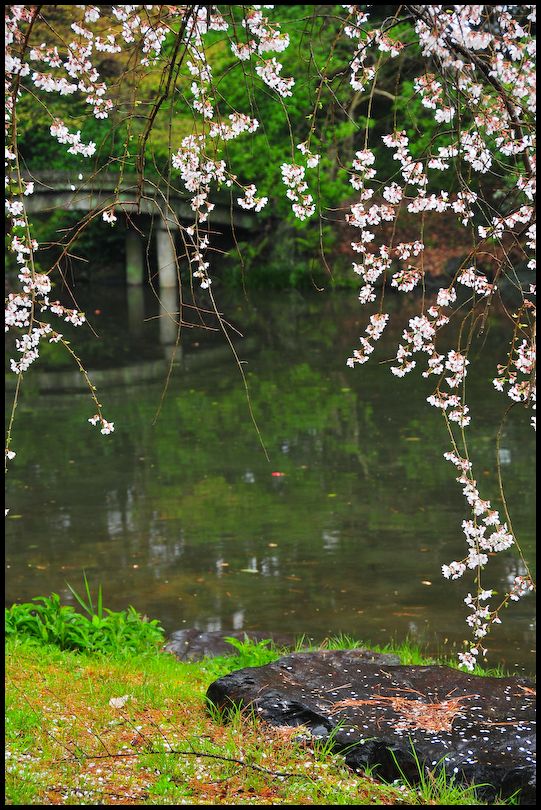 When the great haiku poet Matsuo Basho came upon the empty fields that centuries earlier had been the city of a mighty warrior clan, he was moved to tears. He composed this poem:

I often think of Basho's poem when strolling through this part of the Kyoto Imperial Palace grounds. This pond and bridge once formed the garden of the Konoe family (近衛家), who for nearly a thousand years were at the pinnacle of power within the Emperor's court. Now, however, their villa has utterly disappeared. All that remains are the hints of their once-magnificent garden: the pond, the stone bridge and dozens of descendents of the weeping cherry trees scattered throughout their grounds, a tree they loved so much that their villa was affectionately known as the Sakura Gosho (桜御所), the Cherry Blossom Palace.

Superb capture of the petals falling on wet stones.....too much rain for these delicate flowers! I love your introduction, am quite familiar with that haiku as I was closeby the area last June, in Hiraizumi.
Even if you were not writing anything...I look upon your compositions as.....haiku with a camera!

@Japanalia: Thank you for such a kind and generous comment. That you think so of my photography is very pleasing. Thank you.

in a few days I will be in Kyoto. I'm afraid ... too late for sakura. Today in Tokyo ... rain. Too bad for sakuras.
Fortunately ... your pics with healthy cherry blossoms.

Taken after rain ? Green is clear and beautiful. Nice shot.

Delightful post...I will listen to the fish. best...jerry

A beautiful fitting tribute GJC! The explanation brings it all together. Well done! ;-)

Wow, now this is a beautifully composed, poetic photo - congrats

Again you have greated a 3-D image. Good work.

Charming spring scene. The contrast with the green is wonderful.

I love how the cascading blossoms frame this image. Lovely setting!