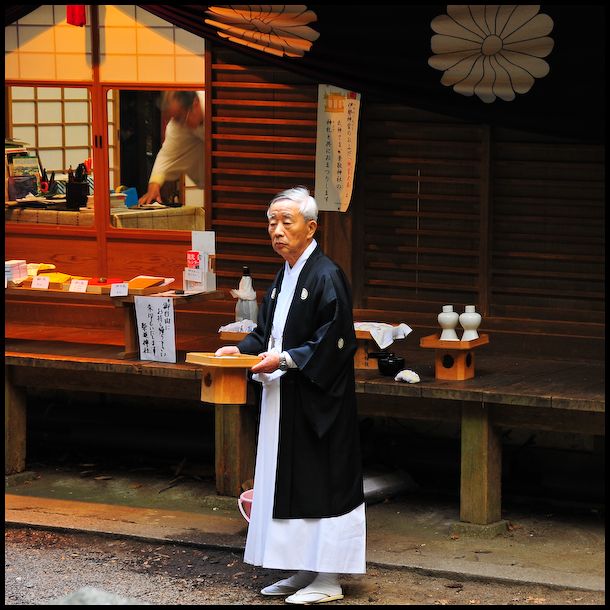 The last in a series of images showing hatsumode: the Japanese tradition of visiting a Shinto shrine in the first three days of the New Year.

This gentleman cordially greeted every visitor to the shrine, wishing them a happy new year and giving them small cups of Japanese rice wine (sake; お酒), which he is holding in a traditional Shinto wooden offering stand (called a sanbō; 三方). The two curved, white bottles in back of him are traditional vessels to offer the gods their favorite drink -- you guessed it: sake. And to the left you see the shrine office, ready to sell you all the necessary good luck charms to ensure a safe and happy year.

On the purple cloth draped above the window you see the symbol of the Japanese royal household, the chrysanthemum emblem. That is because the god enshrined here -- Prince Sawara (早良親王) -- was in ancient times (the 8th century) the younger brother of an emperor. He was accused of plotting to seize power for himself, and he committed suicide to demonstrate the falsity of the charges against him. Plagues and disasters that followed his death convinced the royal family to establish a shrine to appease his wronged spirit, and he was also named a posthumous emperor: Emperor Sudo (崇道天皇).

Sudo shrine is an impressive place. You can see its magnificent approach here, and for other moods click on the tag sudo

Excellent shot. Thank you for showing and explaining the tradition of Hatsumode.

This has been a fabulous series GJC! Not only were the pictures spectacular; but you also provided us with an insight into the Japanese culture. Thank you for sharing! ;-)

I agree with Eric. This has been a wonder glimpse into your culture. Thank you.

Very distinguished treatment of the gentleman in the foreground and I love the motion of the man in the window. Nice work and thanks for sharing.

Nice picture, glad I came here, I've learned a lot about Hatsumode (of which i had never heard of).

An elegant image of this fine tradition. The smallest detail of this greeting ceremony seems to have been thought out. Everything is carefully placed.

He looks deep in thought.

Very formal & respectful, I like the idea of free Sake :0

Thank you for sharing your traditions. I enjoy the fact the the Gods, like Saki.