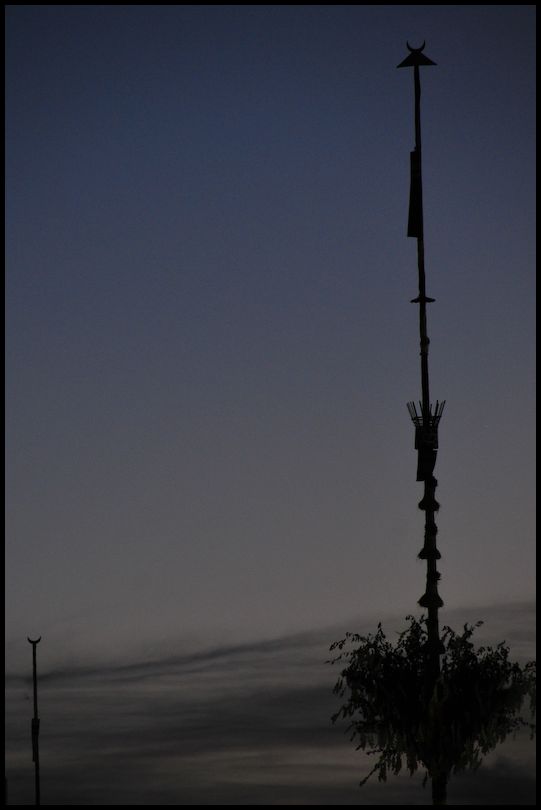 This was taken at Kyoto's Gion Matsuri (祇園祭), one of Japan's oldest and most important annual festivals. It was begun in the 9th century to appease the gods who had sent plague to the city. Because the gods that protect the city are at Yasaka Shrine (八坂神社), this festival honors them. Giant floats, called "hoko" and "yama" (鉾と山), made of wood and covered with tapestry are put together using only rope, and many of them are several stories high, with their elaborately decorated halberd tops reaching even higher into the sky.

Dreams of Miyako (都の夢想) is part of an occasional series that celebrates contemporary echoes of the 1,000 years during which Kyoto was Japan's Imperial capital from 794 to 1869. To see others in the series, click on the tag "miyako" or "都".

Can all but feel communication with the gods themselves in this silently powerful image . . there is a sense of dramatic peace - if there can be such a thing.

i like this. it has a sense of a moment from the ancient past.

I love the minimalistic elegance here.

Striking and quite elegant, I like the dark blue feel and dusk like intonation to this shot.

Very beautiful silhouette! The vertical composition nicely emphasizes the height of the floats.

This is one of those images so exotic and beautiful. Thank you for the pleasure of seeing this.