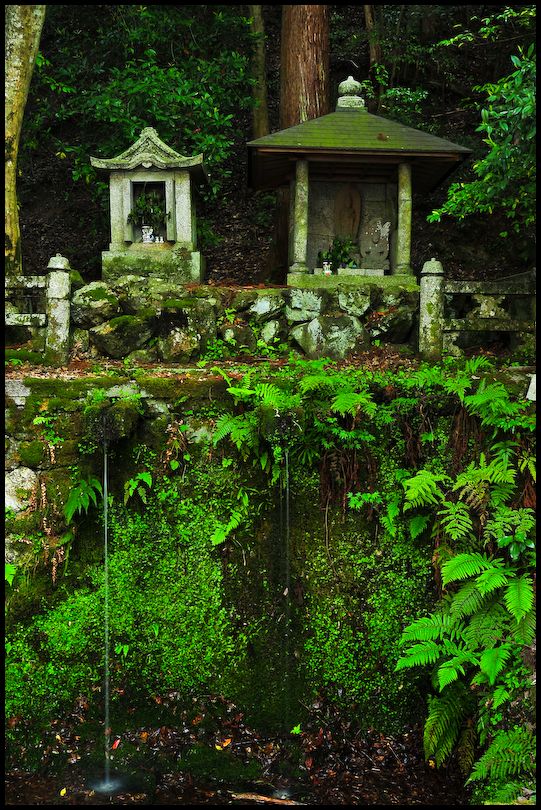 This is about all that remains of Daiunji Temple (大雲寺), founded in 971.

In the days before modern mental health care, waterfalls and sacred water were believed to help relieve mental illness. This belief was bolstered by the miraculous cure in the 11th century of the emperor's sick daughter who came to Daiunji temple, drank the water, bathed in this waterfall (called Fudo no Taki (不動の滝), and prayed diligently to the temple's god. Hearing of this cure, people from all over Japan came to Daiunji Temple to pray and to use the water for treatment. As a result, for centuries the Iwakura area of Kyoto came to be famous as a place for the care of the mentally ill. Daiunji Temple has now almost entirely disappeared, with only a few hints here and there in the landscape of where it once stood. Ironically almost the entire temple grounds are paved over by a modern mental care facility, leaving this old waterfall at the far end of a parking lot.

Your framing is so beautiful. Love these saturated greens and the way the moss hangs onto the structures. Incredible image!

It looks like a miracle – beautiful different tones in green.

seems to be a very damp place ! Nice flashy greens

Great green all over the photo...like the water lines...

This is one of my favourites of yours - I think I've said that on a few occasions now but this one is just so very beautiful. I like the sense of gently falling water from the top to the bottom, and those amazing greens, especially how they reach in from the right side. It seems a very tranquil and calming place, somewhere for peace and reflection.

Oh wow... this place is exactly a thousand years older than me... and I LOVE ferns and those greens... I would love to be able to visit this place one day... where is it located?

I read your description just now and it sadden me to hear that no respect was payed to this place... there is no irony in lack of respect... I praise you for making such a beautiful picture of what remains if the temple...

My eye is drawn to the more prominent water line over and over, that's a fabulous effect - just a small gesture of stillness in a flowing, active element. Very cool.

i can see how this would work. beautiful place, i like the green everywhere, even on the roofs.

The lush ever new greenery contrasts poignantly with the beautiful old remains of the temple which will not be renewed. It is a beautiful composition GJC of a very lovely subject – so many fine details such as the tree trunks echoed by the pillars of the shrine…

Oh beautiful use of shutter speed to capture the essence of the "sacred water"! Wonderful find and great history! Thanks for sharing such marvelous work!

It's too bad that it is now a parking lot. But I think this little water fall's legendary healing ability is the best feature, and it means a whole lot more than the entire temple. Beautiful shot.

I really like the green tones all over the photo. And the falling water looks fantastic! Wonderful explanation as well!

oh the irony. sometimes i think we go backwards instead of forward in our wisdom.

the little shrines are lovely.

GJC, beautiful natural setting and sad remembrance of what once was.

A brilliant image. The description is a little sad but upon reflection, it seems fitting that a mental hospital be nearby. Thanks for the background information.