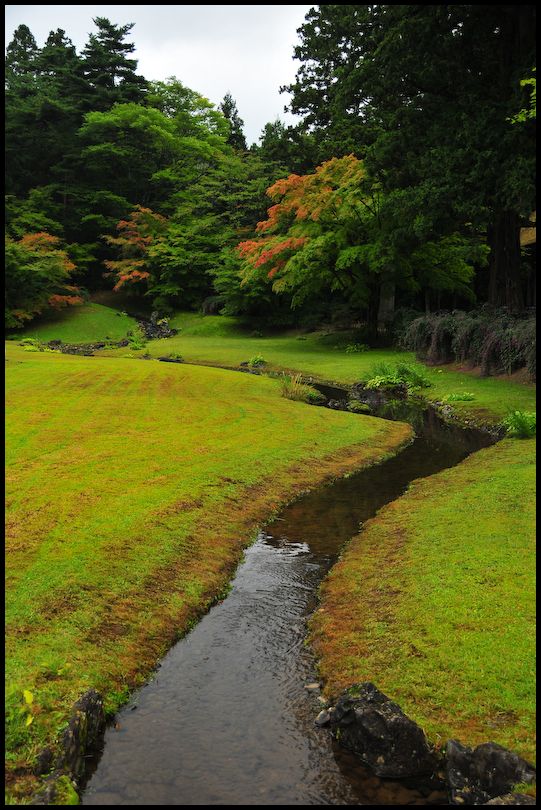 This is from the archives, taken in Iwate Prefecture (岩手県) about a year ago. Work has been too busy lately to pick up the camera so I have to dig into some older photos.

This stream is man-made and dates to the 12th century or earlier. It feeds into a large pond in the garden directly behind us, and the stream was used for an aristocratic poetry game called "Kyokusui-no en" (曲水の宴, literally, "meandering stream party"). The game was most popular during the Heian period (794 - 1185) and involved around seven participants who spaced themselves along the banks of the stream. A cup of Japanese rice wine (sake; お酒) was set in the stream and each poet had to finish a complete waka-style poem before the sake cup reached them. The more you drank, the harder it became to write a good poem, but the more fun everyone had.

I loved the brilliant story as much as the photo which is really saying a lot!

As ever, your colours are wonderfully subtle with great greens and I love the composition!

This is simply gorgeous and gorgeously simple. I feel like I am being carried down the stream! And I just love the text too.

fantastic scenery and great composition !! you got it nailed here, my friend. I just love it and here's my 5 star click for one of the best landscapes !!

Nice photo and thanks for leting me learn about 曲水の宴.

Love the color and composition.

Such lush green. I want to take off my shoes and squish through that heavenly garden!

What a refreshing landscape nicely composed! Funny story too!

What a charming atmosphere! The perspective and tonality are soooooo lovely! Thank you for the story too.:-)

lovely composition - it is great of follow the stream into the shot and it surroundings are beautiful - lush, vivid greens - it is so full of life!

all best with your work. no complaints about archive photos - this one is so tranquil - i feel like it's been a mini holiday to come and look at it.

I love the dominance of green...

Very interesting story, that certainly brings another level of enjoyment to this already beautiful landscape.

I adore the greens from the Nikon. Super compo with the stream meandering gently back and the leading the eye to the red tints on the trees. Wonderful.

A wondrous place. Great information. Thanks.