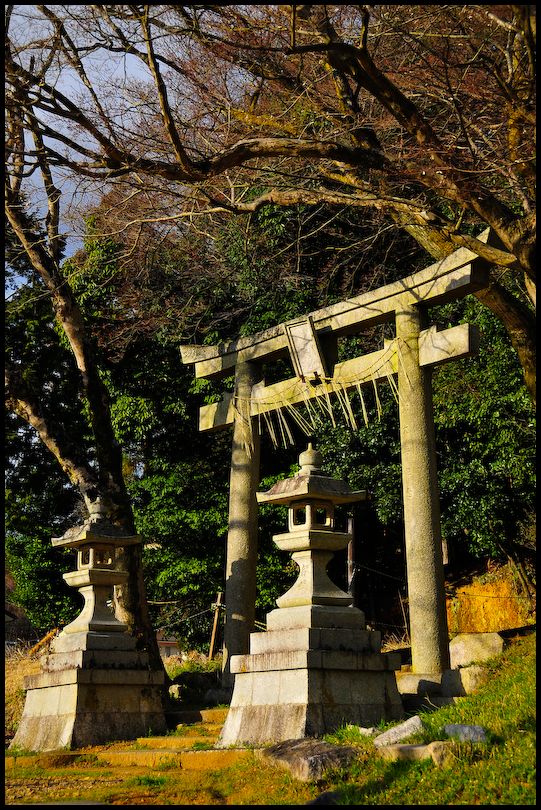 This is the entrance to a wonderful, though to me, melancholy Shinto shrine. The shrine is called "Myoken Shinmeisha" (妙見神明社), built to honor the god of the North Star "Myoken" (妙見様), a popular deity in olden times. The shrine sits behind this entrance now in a highly suburbanized area in what was rice fields only a short time ago. Until then Myoken watched over the farms from his perch atop the hill behind this "torii" gate. A long flight of stone stairs, carefully laid down long years ago, still provides an elegant ascent. But where once stood Myoken's shrine is only an abandoned, rotting ruin of wood. Several of the stone lanterns have fallen over or are missing pieces. The shrine has moved to another place at the base of the hill (you can see an image here) but atop the hill there is a sense of beauty and meaning that has been forgotten.
Tomorrow I'll show you the top of the hill.

I like the corner of blue sky. The wooden structure looks like a rather melancholy face! There is a sense of beauty and of stillness though, and of the wood of the shrine starting to look like the trees. In Hebrew the word "holy", Qadosh, has a meaning of "set apart" - including from the ordinary. Even though this is neglected, it's still set apart, and marked out as special in this photograph.

Nice strong colors and interesting information. Good for my culture

nice story behind a beautiful gate

There is a great sense of upward movement in the structures as well as the tree reaching for the blue of the sky and yet the gate is also very grounded. The touches of orange are lovely against the green and balance the blue. I am very interested in seeing tomorrow’s image…

A lovely image but sad story about the neglect.

This is an interesting narrative and, yes, sad to see something like this in decline. Looking forward to seeing the space at the top.

In this disposable fast moving age it is heartening to see history weathering time.

This is quite a find... I'm so drawn especially after reading your words. Can't wait to see the next pictures!

Nice shot. I have seen the torii many times in your previous shots. They all have the standard two-tier design, but somehow they're very different- mentally speaking- in where the gate will take you.

Seems to be an interesting and good feeling place !

i like the sense of power in this entryway.