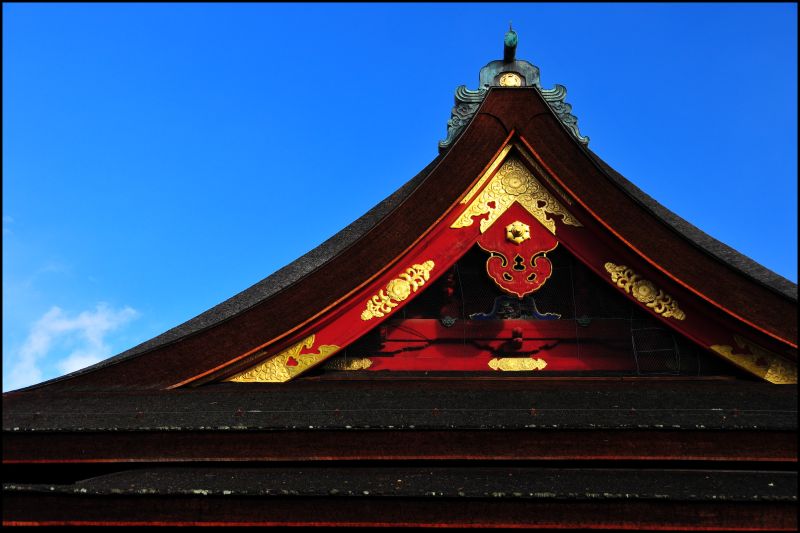 This is one of Kyoto’s most famous (and most beautiful) Shinto shrines. It honors the deified spirit of Sugawara no Michizane (菅原道真) a court noble and scholar of Chinese classics who lived from 845 to 903 during the Heian period (平安時代). While serving at court he fell victim to a series of rumors spread by an arch-rival, Fujiwara no Tokihira (藤原 時平), who convinced the Emperor to demote Michizane and send him into a humiliating exile in far-away Kyushu (well, back then there was no high-speed train!). A few years later Sugawara died and in quick succession came numerous disasters and portents ranging from earthquakes, typhoons, a solar eclipse and, most importantly, a series of catastrophes at court: the death of the Emperor’s son, Crown Prince Yasuakira (保明親王) in 923, the death another Crown Prince two years later, and a lightning bolt striking the imperial palace in 930. Convinced that these were all the result of Michizane’s aggrieved spirit, the imperial court posthumously restored Michizane’s titles and rank, and in 947 established a shrine to appease his spirit. The current Kitano Tenmangu shrine is in this same location, and the stately roof you see here is from the main shrine building (本殿), originally constructed in 1607.
Because of Michizane’s fame as a man of great learning, he has become the god of education, and because of his skill with the brush he is also the god of calligraphy (書道).

This is exquisite. The way you've divided the sky into two and the detail on the gold is very beautiful.

I like the one sided framing and the colors

Thank you for sharing that wonderful reportage :-) and this picture is truly exquisite.

Beautiful shot. I love this roof contrasting with the blue sky :)

what a great piece of art, lovely composition and so great blue sky

Your usual perfect compo, and beautiful colour contrast. I haven't visited this place for at least a year.

Amazing what the energy of history does to a photo ;)

Oh, that beautiful blue sky really compliments the architecture and warm colors of the shrine. Great photo and I love the composition.

Such a beautiful architecture but your strong composition and tonality have made it even more eminent!!! Yes, fascinating history!

Love the bold blue and red separated by dark brown or black. A design within a design. And the gold, red, green ornamentation is simply beautiful - I am sure he was appeased. The little wisp of a cloud adds a touch of softness – lovely.

Another shot with fantsatic colors. An interesting story as well...

A brilliant composition. The colors are wonderful. Thanks for the background information.

Great colors, I also like the fine ornate details in the temple.

I really like the history you're providing and this shot. Your story reminded me of Onmyoji (陰陽師) I saw a few years ago.

very nice rooftop image to blend in with the crisp blue sky!

Nice shot I really like the tone of the shot.

the wispy cloud goes so well with the gold ornamentation and also seems as if it could be a bit of 'sky calligraphy'. a really strong image.

The light is just right: the details in the gold engraving has been beautifully captured.

i love the framing of this one.