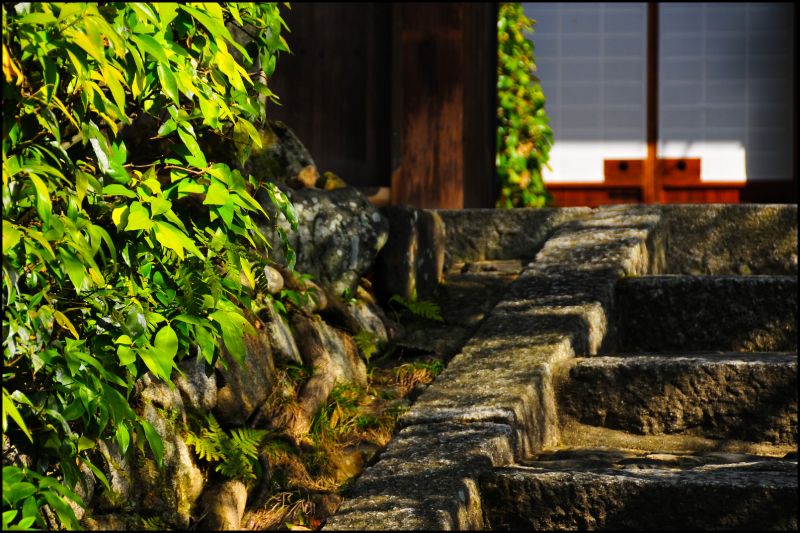 Konpukuji Temple is a tenderly modest place that nevertheless packs an aesthetic punch. It has done so for quite some time, for it deeply impressed Japan's most famous haiku poet Matsuo Basho (松尾 芭蕉), who enjoyed it enough to stay here for several nights in 1670, and the temple and its associations with the great Basho acted as a muse for another of Japan's famed poets Yosa Buson (与謝 蕪村) whose grave is here.

Founded sometime during the 9th century, the temple is now part of the Rinzai school (臨済宗) of Japanese Zen Buddhism.

The light is exquisite!

The green of the leaves is so fresh and the sunlight is perfect. I like the balance between the left and right o the frame too. Modesty is often more aesthetically and spiritually impressive than showiness.

You weren't wrong about the Nikon loving the greens - they simply pop off the screen at me and slap me in the face. I especially like the depth in this one - those stairs leading me back to the shoji, and the treat of finding a smaller green element balancing out the first.

BTW - How do you find these places? Never heard of Konpukuji? Or Jisso-In for that matter (before seeing it on your blog)!

@Stu: The short answer to your question is: walking. I walk a LOT and I always try to take different ways. In the process I stumble across many, many things. That said, since you know Shisendo, this temple is about a 15-minute walk from there. Definitely worth the trip, though you have to follow the signs carefully because it's a twisting, confusing way. But the neighborhood is quite old with many huge old homes, so there is lots of interest along the way. The photo from two days ago, for instance, was taken in the neighborhood.

Again, the oneness with Nature . . such beautiful images, beautiful thoughts.

Beautiful light. It looks so peaceful

Waiting for Basho to add the byline. best...jerry

I enjoy the dappled light/shadows that are spread across the whole image and animate it. The old stone steps are in wonderful contrast to the new greenery – lovely!

Really appreciate you include the Kanji in your text... Interesting to find the poet Basho's name- 芭蕉 is banana in Chinese. Is this the same in Japanese? Nice warm lighting, zenful!

@Howard F.: Thanks always for your visits. I didn't know about banana! That's pretty amusing. No, in Japanese it's the English word "banana" made phonetically: バナナ.

Its the leaves that do it for me on this photograph... beautiful.

Very smart focussing, the DOF is impressive and draws the attention perfectly.

i like how you lead our eye up to the door - and the light is exquisite.

Love the tones and especially the green.

Nice light on the stones and nice details of the leaves

I like how you composed it with lots of harmony and how you managed the DOF.
Of course, as always with you,the light is beautiful.