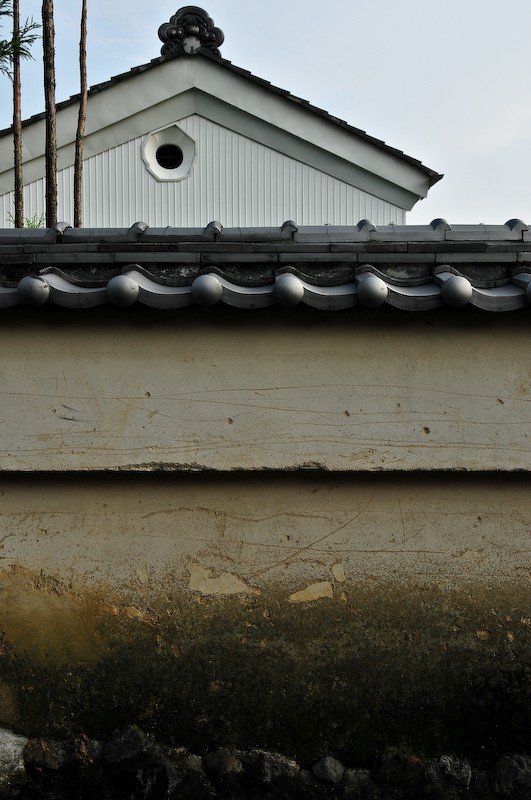 Many of you have asked about these old storehouses. They are common in my part of northern Kyoto, as well as in some of the downtown areas where older houses remain. They are large, two-storey buildings made of thick mud walls (today's image has modern tin siding added) that are designed to be fireproof. Families and shops used to store all their most valuable items (scroll paintings, kimono, etc) in them. They are often -- like in today's shot -- within the walled grounds of a compound composed of several buildings including the main house. The small hole at the top is for ventiliation, and they often have a Chinese character 水 (water) inscribed near the top window to ward off fire.

Thanks for your insightful words. They really help understanding thos beautiful pictures. Your composition and eye for details are great again...

thanks for the infos & this typical photo!

such an interesting text, thanks and the photo is wonderful, I love the way the hole is framed it's almost like a bottle effect :)

Interesting serie and thank you for explanations. Your blog is a "storehouse" of informations about Japan... :-))

Love the information! The shot is lovely with the lines of the trees and the cirlce near the top of the building. I also like the waves of the roof line.

my favorite of the bunch so far. beautiful, unique composition.

Thanks for the explanation! Another nice shot!

This is such a pleasing composition with its horizontal and vertical lines. Very interesting to read your information. Thank you very much.

Classic composition of shapes and textures . . all very harmonic.